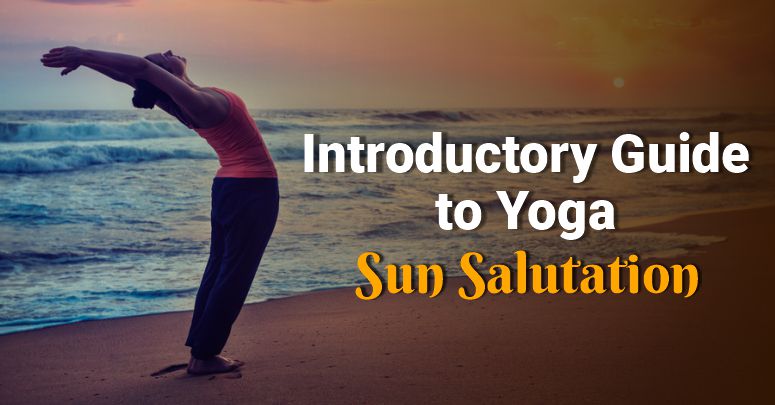 Surya Namaskar, also known as sun salutation came from Surya, which means sun and Namaskar means to bow down. Sun is the primary source of energy for Earth and if your body and mind are in tune with its cycles, you enjoy good physical and mental health. It is a major reason why the ancient art of yoga has a sequence of sun salutation.

The sun salutations comprise of 12 physical postures. These give your spinal column a good stretch through maximum range of motion. Moreover, you practice these asanas with synchronized breathing and every pose helps you maintain a proper balance. Let us now understand a bit in depth about this yoga exercise.

Although sun salutation comprises of 12 poses that you practice in a repetitive manner, there are some variations to this wonderful yoga exercise.

Given below are four major types of sun salutation which you can practice.

Let us now understand each of these categories a bit in-depth.

The sun salutation you practice in Hatha yoga is also the most ancient form of Surya Namaskar. It is done at slow speed with you holding every pose for longer time. This form of sun salutations is best suited for those who find this exercise a bit uncomfortable.

Do you know which yoga poses are done in Hatha Surya Namaskar? Read below to know the answer.

Each of these sun salutation pose improvess your body’s level of strength and flexibility. It also takes care of the three doshas namely Vata, Pitta, and Kapha. Yoga gurus recommend this form of Surya Namaskar to keep you away from numerous health issues.

Ashtanga Surya Namaskar is way different from the traditional Surya Namaskar in terms of sequence, poses, and the speed of practice. In comparison, it is much faster and focuses on combining breathing and body movement when moving from one asana to the next.

Two variations of the sun salutaion you practice in this style of Surya Namaskar are;

The first sequence of yoga asanas you practice in the Ashtanga Surya Namaskar. This one comprises of 10 yoga poses. Just 5 rounds of this sequence is enough to help the body generate heat and develop stamina.

The 10 poses you practice in this form of sun salutation include;

Now, let us check out the second part of the Ashtanga Surya Namaskar.

This is a bit intense sun salutation sequence in comparison to the previous one. Every breath in this sequence is accompanied by a movement in the consecutive yoga asana.

However, there are a total of 19 yoga poses in this sequence namely;

Did you notice that there was a flow of Four Limbed Staff Pose to Upward Dog Pose and finally to Downward Dog and Warrior I pose? The reason being this is a vinyasa flow sequence which helps your body develop the strength to continue the sun salutation practice.

Sun salutations practiced in Sivananda Surya Namaskar were taught by Swami Vishnudevananda who was a disciple of Sivananda Saraswati.

The Sivananda Surya Namaskar is similar to Hatha sun salutation sequence. There are a total of 12 poses which you do in one continuous round. However, you transition from one yoga asana to the next at a medium pace.

This is a fastly transitioning flow of yoga poses and is quite similar to the Hatha sun salutation. It includes a total of 12 yoga asanas which you can practice using some yoga props.

Given below is a breakdown of the Iyengar Surya Namaskar.

However, for you to practice sun salutation without any hassle, you should avoid making certain mistakes.

Given below are 10 mistakes which you should when doing Surya Namaskar as a beginner.

Keep in mind that sun salutation are a part of the yogic practices. Therefore, like every yoga pose you need to synchronize the body movement with proper breathing. Forgetting to breath during sun salutations would not yield the proper results. Yoga experts recommend you practice slowly but correctly.

If you ignore the Hasta Uttanasana, it leads to breakage in the balance of breathing and body movement. Doing this takes away the chance to strengthen and compress your spine. At the same time, it also puts unnecessary pressure on your neck.

When you do the four-limbed staff pose, as a beginner you might put undue pressure on the lower spine. This leads to the lower body sinking towards the floor and you suffering from a debilitating back pain.

The solution to doing sun salutation without commiting this mistake is simple. Press your legs and palms into the ground. Engage your abdominal and upper body muscles. This ensures your spinal cord stays erect.

4. Getting Confused Between Cobra and Upward Facing Dog Pose

As a beginner to Surya Namaskar, you might get confused between the Cobra and Upward Facing Dog pose. As a result you do not practice either yoga asanas. You should first start with the Cobra pose and then move onto the dog pose.

5. Not Moving Forward in Ashwa Sanchalanasana

Keep in mind that towards the end of sun salutation you might find moving from Downward Dog pose to the Equestrian pose a bit confusing. It is what gets your body into a weird position which extends the knees beyond what is normal. The result? Too much pressure on your knees and hip flexors.

At times, instead of performing a warm-up routine before doing the Surya Namaskar, you might jump straight into it. This results in a serious muscle injury especially if your body is not flexible.

Also, you should follow a proper cool down routine after completing the sequence. Yoga experts recommend you start with some light stretching and joint rotation.

7. Increasing the Number of Sets

For starters, yoga experts recommend that you should practice four rounds of sun salutation and increase the number of rounds over time. It gives your body enough time to understand the movement involved in the entire sequence.

After doing all the Surya Namaskar poses, you have to come back to the Pranamasana position as it what marks the completion of one cycle of this yoga sequence. However, if you decide to skip this pose it will lead to an incomplete cycle.

Every sun salutation asana requires your utmost attention and dedication. Therefore, you must practice each yoga asana using the correct technique. Remember, a poor alignment will only cause strain, injure your joints, and worsen the back pain. Make sure your mind stays in the present moment and not wanders off during the practice.

For you to feel the calming effects of Surya Namaskar, remember to do this yoga sequence slowly. As a beginner you might be tempted to do all the 12 sets in one session, do not do that. Yoga experts recommend you take breaks and work at your own speed.

Now, if you manage to steer clear of all these mistakes, there is a world of benefits waiting for you.

Let us now check out some of the major benefits of sun salutation practice.

1. Improves Flexibility and Tones the Body

There are numerous yoga asanas in sun salutation which engage different parts of your body. In the long run, this tones your body and makes it more flexible.

Daily practice of Surya Namaskar improves your metabolism which reduces weight in the belly area. Moreover, it stretches your abdominal muscles, strengthens the skeletal system, and prevents unwanted fat deposition.

Like other yoga asanas, the sun salutation also focuses on breathing exercises. It relaxes your mind and improves the intellect. A relaxed mind combined with a healthy body improves your energy levels and self-awareness.

In yoga, deep breathing techniques when combined with the right asana have a positive effect on the nerve cells. Doing sun salutations regularly helps create a balance between your left and right brain. It is what improves emotional stability and also unleashes your creative side.

Our Yoga Teachers Training center is a one stop for people seeking a place to get yoga training from experienced, knowledgeable, and certified yoga teachers.